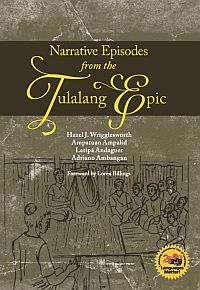 Narritive Episodes from the Tulalang Epic

By far the more popular epic performed in Ilianen Manobo society today is that of the Tulelangan. Held by the older generation of Manobo to be an oral account of their Manobo ancestors performing heroic feats, it is sung in modern day Manobo language and is appreciated by young and old alike.

Tulalang, the immortal hero of the Tulelangan epic, is believed to have lived along the Kulaman River in the Arakan Valley in the north-eastern part of North Cotabato, where the corner posts of Tulalang’s home are said to still stand today. Nearby lie several large stones bearing a resemblance to carabao heads which are believed to have been the carabao of Tulalang which he turned to stone before ascending up to heaven in a golden boat-like vehicle serimbar.

And while epic singers have now become extremely rare, many of the episodes presented in song in the Tulelangan epic are also narrated in prose in the genre of teteremà “formal storytelling” by highly-skilled Manobo raconteurs. Narrative Episodes from the Tulalang Epic presents four Tulalang narratives from the repertoire of three Manobo raconteurs. Each narrative also includes a description of the distinctives of the Manobo narrative’s linguistic form as a result of its having functioned in the culture, and in the argumentation process of settling Manobo custom-law cases kukuman.