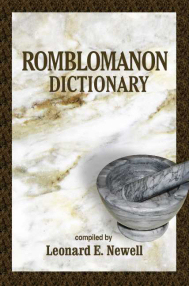 The language of Romblomanon is one of the Central Philippine languages known as Bisayan languages. It is spoken on the Island of Romblon, and on five other surrounding islands with slight dialect variations. The dialect spoken in and around the town of Romblon was chosen as the basis for the lexical description of this dictionary.

This dictionary offers accurate information on how modern Romblomanon is used, based on the recorded speech of a large sample of speakers. Thus, it provides an important tool for English speakers to use in sharing the wisdom and enjoyment of some of the great literature of the world through natural translation, especially from English. It can also aid in reading and understanding literature in Romblomanon.

Wherever possible, full English sentences are used in definitions, translation equivalents and explanatory equivalents. In this way, it is hoped that the dictionary can be used as an aid for Romblomanon speakers in their oral use of English and in their written use of English in sharing Romblomanon knowledge and culture with the world.

A further aim of the dictionary is to demonstrate that Romblomanon is a bona fide language with all the distinct linguistic and cultural features of a major language. Over a period of about ten years a corpus was collected and transcribed representing almost 250 areas of Romblomanon culture and genres. Computer technology was used to provide the basis for lexical analysis and dictionary compilation.

The order of presentation of word forms within this dictionary makes the role (case) relationships between nouns and verbs primary. Instead of simply listing a few possible word-form variations of any given root, only those that actually occur in natural speech are used and these are presented in an orderly and systematic manner. The computer-analyzed corpus provides a basis for omitting uncommon or nonexistent word forms.

Natural sentences are used in almost all entries and sub-entries. They represent common usage of word forms, taken from what people have actually said. The compiler has worked from a computer-prepared array of sentences for each word form to derive definitions. Thus, instead of simply illustrating definitions, example sentences provide the validity of the definitions found within each entry.

A large corpus of culturally oriented material, collected and used as a basis for dictionary entries, has allowed them to be used also in making capsulated ethnographic statements throughout the dictionary through short descriptive statements, tables and appendices relative to dictionary entries.