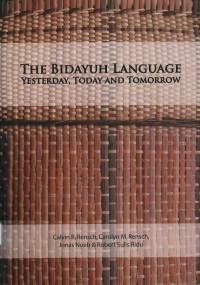 Part I: Language Development in Bidayuh: Past, Present and Future

In this paper Jonas Noeb and Robert Sulis Ridu give an account of the efforts by various people over the past two centuries to record Bidayuh words, produce written materials in Bidayuh and bring education to the Bidayuh. It also describes the ongoing Bidayuh Language Development Project and makes suggestions for further language development in the future.

This paper by Carolyn M. Rensch is based on data collected in 25 dialects of Bidayuh in 2001 and later. It contains a brief phonological description of present-day Sarawak Bidayuh and focuses in detail on the various occurrences and roles of nasality in the Bidayuh language complex, spanning all the varieties from Rara in Lundu District to Sadung in Serian District.

Proto Bidayuh and Its Relatives This study by Calvin R. Rensch presents a reconstruction of Proto Bidayuh and its relatives (Proto Bakati', Proto Bidayuh-Bakati' and Proto Land Dayak). It also traces the development of these languages from earlier forms of Austronesian. The analysis is based on over 700 cognate sets assembled from 25 wordlists collected in the Sarawak Bidayuh area since 2000 as well as wordlists of related varieties spoken in West Kalimantan that have been collected by others.

Dr. Calvin R. Rensch and his wife Carolyn M. Rensch joined SIL International in 1954. They worked in Mexico for 20 years doing linguistic research and language development in the Chinanteco language. During that time Dr. Rensch obtained his doctoral degree from the University of Pennsylvania. His dissertation research resulted in a comparative study of the phonology of the Otomanguean languages of Mesoamerica. After that, Dr. and Mrs. Rensch taught linguistics and carried out other academic and administrative activities for SIL International in the USA. Since the mid-eighties they have worked in Asia, guiding and participating in sociolinguistic survey projects in several parts of South Asia and teaching linguistics in various parts of East Asia. Since 2001, they have been members of the SIL team contributing to the Bidayuh Language Development Project. Both of them have a special interest in phonology and language survey.

Jonas Noeb is a Singai Bidayuh. Born in 1944, he trained as a teacher, and later obtained a diploma in Teaching of English as a Second Language. He served as a headmaster and school inspector. Since retirement, he has enjoyed a second career as an Assistant Cultural Research Officer at the Council for Customs and Traditions (Majlis Adat Istiadat), Sarawak, recording Bidayuh oral traditions as part of continuing research and review after the codification of the customary laws. He is also actively involved in Bidayuh community affairs as an influential member of the Dayak Bidayuh National Association (DBNA) and the Association of Research and Development Movement of Singai (Redeems). These activities kindled his interest in Bidayuh language, culture and traditional laws and moved him to become involved in their preservation and development.

Robert Sulis Ridu is a Bukar Bidayuh, born in 1935. He trained as a school teacher, then taught for six years in Anglican mission schools in the Bidayuh region. After this, he served as a school affairs officer in the Kuching Rural District Council, then in the Sarawak Education Department. Since retirement, he has been with the Council for Customs and Traditions (Majlis Adat Istiadat), Sarawak as a Cultural Research Assistant. In this capacity he collected many Bidayuh texts related to traditional customs, then was involved in codifying them as Bidayuh customary law. He was involved in the founding of the Dayak Bidayuh National Association (DBNA) and is highly respected in the Bukar-Sadung community for his expertise in Bidayuh customary law and Bidayuh traditions.